Lucien Georgelin has always reinvented his recipes and advocates research and development to continually innovate and propose new products to consumers.

On the first semester of 2017, Lucien created a new range of “gourmet and light” jam with 30% less sugar, a new range of 4x100g compote with fresh flavours (fridge section) and a range of apples in the oven with apple from the valley of the Garonne (south of France).

Always focusing on the provenance of the fruits, Lucien knows how to be responsive in order to meet the expectations of consumers and his customers in order to bring them complete satisfaction. 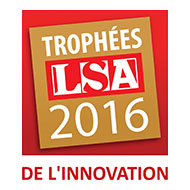